The post New contracts have been agreed with these two Newcastle United stars – Report appeared first on NUFC The Mag.

The post Hamstring blow for Jonjo Shelvey and Newcastle United appeared first on NUFC The Mag.

According to the Chronicle, Newcastle United have held positive talks with both Jonjo Shelvey and Matt Ritchie over contract extensions. Two senior players amongst the Toon squad after joining in 2016, both stars are understood to have reached an agreement with the club in principle.  Shelvey – who lost his place towards the back end […] 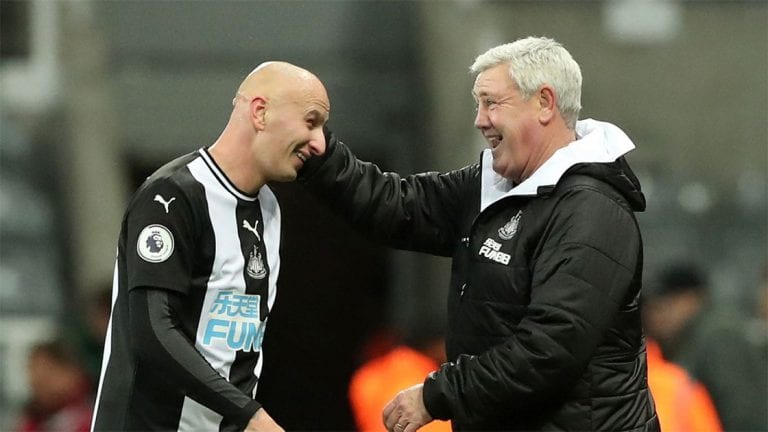 The post Jonjo Shelvey says nice to prove people wrong who said Newcastle United would be relegated appeared first on NUFC The Mag.

Phil Thompson has heaped praise on Newcastle United midfielder Jonjo Shelvey for his recent form, but doesn’t believe it will be enough to prevent his side form losing to Burnley on Saturday.  The 27-year-old Toon playmaker has five goals so far this season including three in his last three matches, but Thompson still expects the Clarets to edge the meeting at […]

Newcastle United captain Jonjo Shelvey is ‘playing with a point to prove’ at this moment in time, according to The Chronicle journalist Mark Douglas. The Magpies correspondent made the claim on the newspaper’s website, as he raved about the 27-year-old goalscoring performance in the 2-1 win over Southampton on Sunday. “Whatever else you may say about […]

Paul Merson has heaped praise on Newcastle United midfielder Jonjo Shelvey for the presence of mind he showed to score against Sheffield United on Thursday night.  The 27-year-old kept on playing when everyone else around him had stopped for an offside call from the linesman, only to see the goal given after a VAR review. And Merson was suitably […]

Chris Sutton has taken to Twitter to slam the initial decision to call Andy Carroll offside in the build up to Jonjo Shelvey’s goal in Newcastle United’s 2-0 win over Sheffield United on Thursday evening.  The Toon midfielder was called back for a flag as he ran through to double the Magpies’ lead at Bramall Lane before the initial decision was overturned […]

Newcastle United midfielder Jonjo Shelvey has the potential to be “out of the ordinary”, according to The Athletic journalist George Caulkin. The 27-year-old has reestablished himself as a mainstay in the Toon Army’s engine room in recent weeks, and has hit two goals in his last four outings. But while Caulkin did admit that he was surprised […]